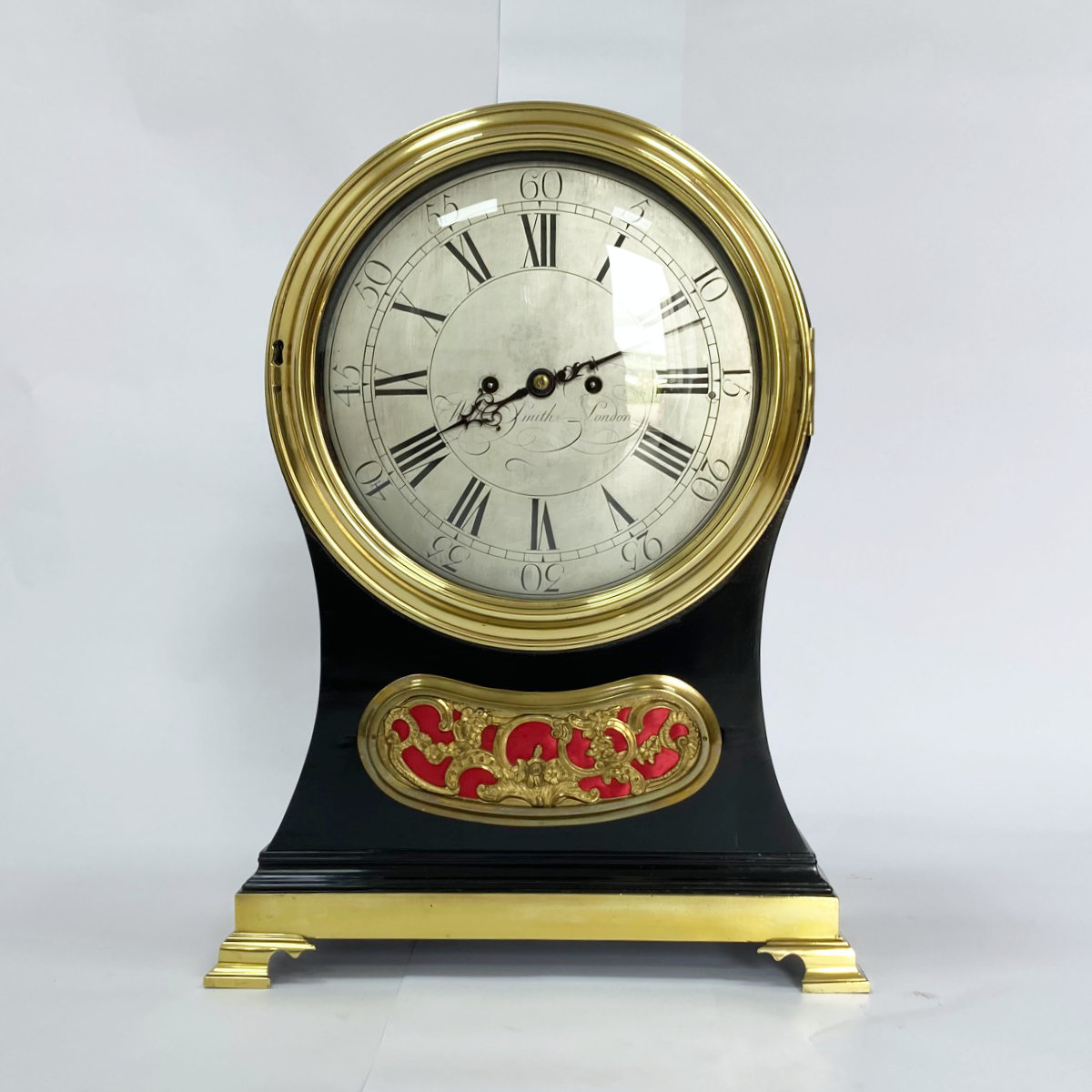 This early and beautifully imposing example is comprised of an ebonised continental style case set upon a thick brass surround at the base and four well-proportioned brass ogee bracket feet. The hips of the case have an open section either side adorned with fine gilt brass filigree type inserts representing the Louis XIV sun god motif contrasted with striking red silk backing behind.

The front of the case below the dial has an elongated u-shaped open section following the curve of the bezel and has a thick gilt brass surround and central brasswork panel with rocaille detailing and red silk.

The clock face above is comprised of a 10.5” silvered and engraved dial with large and typical Eighteenth century minute markings around the outer circumference which surround the hours represented in roman numeral form. The centre of the dial is beautifully engraved with the clockmaker’s name, William Smith, London and has finely detailed blue steel hands typical of the period. Surrounding the dial is a superb, inch and a quarter wide hinged and graduated brass bezel with convex glass.

The reverse of the clock has a large, hinged door with original lock and key, revealing an unusual movement design incorporating the escapement onto the backplate behind the crutch. This may signify a slightly later conversion from a verge escapement to an anchor escapement, a common change intended to improve accuracy in similarity to the way In which lantern clocks were converted to pendulum as technology advanced a century earlier. The movement also incorporates a bell and striker at the top of the movement.

Of significant interest is a small ivorine plaque affixed to the inside of the case bearing the name Percy Webster, clockmaker, Great Portland Street with the inventory number: 6960. Webster was a notable antiques dealer and clockmaker who operated during the late Nineteenth and early Twentieth Centuries and is considered by some to be the first notable authority on antiquarian clocks and later took up the position of Master of the Worshipful Company of Clockmakers. His son, who followed his Father into business was equally respected and was responsible alongside Herbert Cescinsky for producing the book that became, and to some extend still is, the clock collector’s bible, “English Domestic Clocks”. With the addition of this plaque, we can be sure that at some point before 1938, this superb example was considered good enough to be included for sale at Webster’s London premises. Sadly, the inventory records for the Webster business do not seem to exist.

The maker, William Smith is known to have worked in Moorfields, London which had slowly established itself as a centre for clockmaking, engraving and clock brass founding in the years after the Great Fire of 1666. From around 1740, Smith had gained himself a good reputation as a maker of turret clocks and is known to have supplied one to Princess Amelia, the eldest daughter of George II. Little is known of Smith’s life other than his documented move to Bristol during the 1770’s and his subsequent death in 1789 but enough examples of his turret clocks exist to demonstrate his superior craftsmanship. His domestic clocks are exceedingly rare and so the culmination of this fact, the clock’s exquisite design and it being a rare exemplar of brasswork (and probably casework) emanating from the centre of the Moorfields clockmaking industry during its heyday, was likely enough to convince Webster of its historical merit.

Smith’s London working dates would also attest to this being a very early example of an English balloon clock, a design style that was originally imported from France and grew in popularity from around 1760 until about 1800. With Smith’s move to Bristol in the 1770’s we must therefore consider a date of circa 1760.

A truly magnificent early example and highly unusual in design. The movement has recently been fully serviced by a qualified BHI affiliated clockmaker. The clock measures, 53cms in height, by 40cms in width and 22cms deep.